The Pistons Take Down The Sixers In Philly 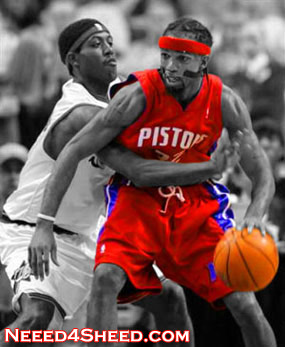 The Pistons beat the Sixers 101 – 91 setting a franchise record for most road wins in a season, with 26. The Pistons record is now 57 and 14, with just 11 games left in the regular season. Billups and McDyess were Detroit’s leading scorers with 18 each.

It’s hard to stop a team that has the kind of weapons that the Pistons do. When you play a team like the Sixers you know you have to stop Iverson and maybe Webber but what do you do with the Pistons. If you concentrate on one of our guns another one will start firing. This had been the main problem for Pistons opponents. 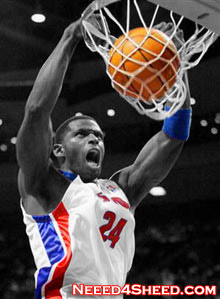 I would also like to get people talking about Antonio McDyess for The Sixth Man of the Year. Dyess has been on fire all year and I don’t think he gets the credit he deserves. Is there even any talk of him when mentioning the Sixth Man Award? Whether he wins or not Dyess is having a hell of a year, and I attribute a lot of the Pistons W’s to him. Antonio on the bench is like having six starters.

On to Mr. Rasheed Wallace, Sheed as always added a couple of very enjoyable clips from the Sixers game. It’s always nice to see Sheed having fun.

Sheed On The Sidelines – Video courtesy of FSN Detroit.