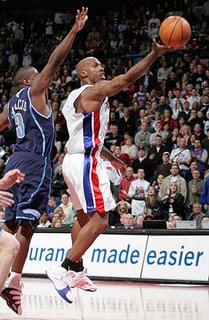 Being a borderline obsessive Pistons fan, when I arrived back home Sunday morning at 5:00am after flying in from Los Angeles, I decided the first thing I wanted to do, before sleeping, before unpacking, before eating, was of course to watch the Pistons Jazz game that I had recorded on my trusty DVR. I hadn’t slept in about 24 hours, but sleep is third in the order of important things in my life, coming in right after food and Pistons, especially considering I had deliberately avoided ESPN on my Jet Blue TV set so that I wouldn’t know the outcome of the game and could watch innocently.

Something happened to me while watching that game and I would like to share it with everyone. I’m not sure if it was the sleep deprivation hysteria causing me to react how I did, but watching the Pistons lose to Utah, again, made me do some Detroit Soul searching. The Pistons are now 26-5, which is an amazing record no matter how you cut it. We look good out there, the team is cohesive, Chauncy is reaching MJ status, Ben is an animal and Sheed is at the top of his game. But, this loss really struck a chord with me like the closing note of a Johnny Cash tune. Now, don’t get me wrong, I know that Detroit would never lose to Utah in a series of 7 and I know that the East is ours once we dismantle Cleveland and Miami and the only real competition when Finals time arrives is San Antonio with a healthy Ginobli. However, this is why I am concerned. The Pistons unbelievable start has caused me to think they are invincible. It has caused me to truly believe that Chauncy and Ben will be kissing that championship trophy on the cover of Sports Illustrated without any doubt. Now, I am not saying that I don’t think they will win anymore just because they dropped an easy one to Utah. All I am saying is that we have to realize it is only January and we have a long, long season ahead of us. Sure, we may reach 70 wins, but who cares. Wins do not deliver championships, champions deliver championships. We lost to Utah twice…once at home in overtime. We lost to the Wizards at home. We lost to Lebron in Cleveland. We are not Superman. We do have our kryptonite and most often, we are our own worst enemy. I guess my point here is to keep the faith but keep it in reality.

I just want fans to remember, it is only January and nothing really matters until June. The Pistons lost in overtime at home to Utah by 4 points, a huge let down because in my mind, OT is when the Pistons tend to flex their late game muscle and retain the poise that the competitor loses. To me, it was a sure thing. But when Chauncy stumbled around and couldn’t make things happen, I went to sleep believing that Utah had just stifled the best team in the NBA for the second time, and this time in our own front yard. So remember Pistons fans, my Need4Sheed is as bad as yours and I would never project a losing season as Detroit is hands down the best team in the NBA miles and miles apart from the crowd, but the harder they come, the harder they fall and last night we fell pretty hard. Peace, love, and Deeeetroit baaaasketballll.