Pistons Review for the month of November 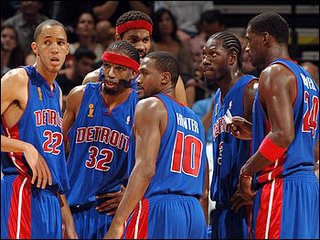 Well the first month of the season is almost over and The Pistons are right on schedule, finishing off the month 10-2 with the best record in the NBA. Take that ESPN and every sports writer who dissed us and said that we would struggle through the first month and be behind Indiana and Miami. With a wonderful record of 4-1 at home (which we should be 5-0 but we got some terrible calls against the Wizards) and a record of 6-1 on the road, The Pistons are rolling right now and we should continue to roll through the month of December. Speaking of December here are some games to really pay close attention to. As they play a big part in the season.

December 25th against the Spurs – We all know why this is A HUGE GAME!!!!
Expect a big game from Sheed.

December 29th against the Heat – No Shaq but we will get a mental edge with a win here.

December 31st against the Cavs – The Cavs have shown early this season that are hungry to be named with the other great Eastern Conference teams and with a current home record of 6-1 are pretty hard to handle in Quicken Loans Arena.
The match up with Lebron Vs. Tay will be one to watch.

As for Sheed, his first month in this young season has been what other GM’s and owners around the league are wishing they had, A TRUE SUPERSTAR. Sheed has been playing his roll perfectly by playing great on ball and help side defense and scoring when his team needs it not ball hogging and trying to do it all by himself like some of the other so called ”Superstars” in the league. Sheed’s best game this month was against the Wizards where he torched Antwain Jamison and everybody else the Wizards threw his way for 33pts, 4 three’s, 11 rbs, 5 assts, 2 stls, 2 blks, only 1 turnover and 3 fouls in 56 MINUTUES. Let’s not forget 4 ball don’t lie calls that were correct by Mr. Wallace. Sheed should continue to roll in the month of December, and with our votes will be one of the forwards on the All-Star team this year.

Some Pistons side notes for the month of November. Lindsey Hunter ankle is getting better he should be back in January at the earliest. Andreas Glyniadakis who was in camp this preseason with the team is playing very well in the D-League, with a recent outing of 27 pts, 4 rbs, 3 blks in 33 minutes of action as a starting forward for the Roanoke Dazzle.