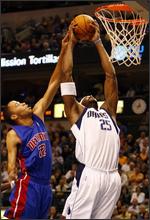 The Pistons, the NBA’s last unbeaten team, opened the season with eight wins to match the second-best start in franchise history trailing only the 9-0 mark set in 1970-71, lost to Dallas 119-82 Saturday night.

Dallas got off to a blazing start with its highest scoring quarter of the season. The Mavericks made 17 of their first 21 shots to build a 40-16 lead after the opening period. The Pistons just never seemed to be able to bounce back

Rasheed received his first tecnical foul of the year and had a few choice words for the refs. I was wondering how long it would take before he let go.